I know that in my travel blog you expect to read about my travels. However, learning about the world is a big part of what’s so amazing while traveling. Sometimes you learn things on the spot. Sometimes, a lesson takes a long time to fully educate you. This is one of those.

Act 1 – First Steps On The Path

When I was 7 years old, we moved to the US. Before we moved my mom had various talks with me to prepare me for what would be an incredible culture shock. One of the big differences I would have to adjust to was the difference in people – in size and color. Being from Cannes, France most people were not fat. And if they were fat by local standards it was nowhere near the definition of fat by American standards. It was incredibly rare for someone to be obese. And, more than 30 years ago, most people there were light skinned. So, a few days before we left, my mom reiterated “Honey, remember, Americans are big and there are many blacks.” This was not being said in a judgmental way at all. But you know how kids can say the most cringeworthy things at the worst moment? She didn’t want that to happen. Hence the preparation.

We get to the US airport and the first thing we need to cross is the immigration desk. I can still see it. My mom standing there, holding my right hand as I stare up, eyes wide, mouth hanging open despite my mom’s best gentle efforts to snap me out of it. Can you guess what was going on? The immigration agent was a really big black woman. As Morpheus would tell you, there’s a difference between knowing the path and walking the path. 7 year old me can attest to that.

Nine years later, I was part of a group that went to see the concentration camps in Poland. Some of my family were murdered at Auschwitz, so for me this was personal. A few days before I left my grandmother told my mom and I the story of how she had escaped the Gestapo. My mom was 36 and this was the first time she had heard the story. My grandmother had kept it a secret for more than 50 years. My grandmother and I talked a lot in the days before I left and the days after I came back. She told me she wanted to hear what I had seen but didn’t want to see pictures. It helped her to have me as the buffer. I knew the pain she had experienced but again… there’s a difference between knowing in your brain and really getting it.  For many many years I knew the story of how she had escaped but I was not able to emotionally understand. My grandmother came from a very, very wealthy Parisian family. When I saw the incredible movie “Woman in Gold” there were a few things that resonated but the scene where they escape through the train station was when it hit a chord. For the first time, I was able to really get what my grandmother had been through. Of course, I know there is a big difference between actually living through it and understanding it, but it’s as close as I can come to it. For that, I will always be thankful to the actors of the movie who were able to help me understand my grandmother, a very closed woman, a little better.

In my life I have experienced a lot of pain, mental, emotional and physical. For many years, not only did I feel the pain but I suffered from it. This continued until I finally understood that suffering only makes me feel the pain twice as much as if I just let it run its course and move on. So, with time, I learned to let pain run its course through me and to let it go so it can move on. You would think that because I knew what pain was, I would be more tolerant and understanding of other people’s pain. But here’s a harsh truth – when there is so much pain and suffering, the ability to see beyond that can be dampened. I explained it once as though I had no skin to act as a layer of protection between me and the world therefore feeling the world raw. Even what would normally feel good when you do have a layer of protection is uncomfortable and even painful when you don’t. And so, at the time, I was far from being pleasant, nice and understanding. As I learned to deal with my pain better and not to suffer from it, the space it left in my life made room for understanding others. Being more tolerant to them and accepting of them. Who I am today is very different to who I was before. And the reason is simply because I learned to experience the pain without the suffering.

I think that generational trauma is the same. My grandmother has lived her entire life with a pain I do not wish on anybody (except the worst of people). That has influenced how my mother was raised. And of course that has influenced how I was raised. Since traveling full time I have come to learn about the paths and journeys of other people and nations and it is enlightening. One such group of people is actually closer to me than others since they are my brothers and sisters – fellow Jews. But unlike me, their ancestors did not move West to Europe when we as a nation were exiled, rather their ancestors moved East to the Arabic countries. I did know about the painful events they regularly experienced at the hands of the people in the countries they had made their homes in and I also knew they had almost all been kicked out when the State of Israel was created. Or so I thought. It turns out there is a huge gap between the knowledge I had and the truth of what happened. As I have opened myself to learning about other journeys and paths, I cannot overlook the ones of my brothers and sisters from the East. However, I do not feel that I would be doing it justice by trying to tell you myself. Instead, I suggest you read this article on the subject.

Paris, France. Charles de Gaulle airport. I am in line to have my boarding pass scanned so I can go through the security check. My version of being in line is being a bit to the side. I like my personal space. In line behind me, with a few people in between, I see a fellow Jew. Unlike me, it is easy to recognize him as a Jew since he was wearing a suit, beard and black hat. He just got himself in line and I can see he is a bit disoriented as to the next step. I don’t offer help since he is in the right place but I figure I’ll make sure he doesn’t get lost.

Off to my right, I hear a woman say in English “Sir, you can pass”. I turn to see who is saying this and more importantly to whom. A tall, pretty, dark girl walks towards the line. She is clearly an employee. Again she says “Sir, you can pass”. This time though, she’s looking at my fellow Jew and pointing at him. At this point he seems really confused. Honestly, so am I. I am facing them as she continues to walk towards the line, he has moved a bit forward to test if he understood correctly and somehow we are all converging to the same point. As we all meet she says “Let me just scan your boarding pass and you can go to security immediately”. She scans his boarding pass, then she scans mine. I say thank you and move forward. I look back at her and I smile to myself. 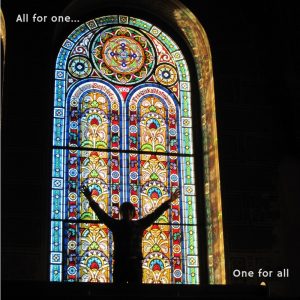 A few days before this happened, there was a large attack against Jews. Often times, my fellow brothers and sisters admit to hiding signs of their Jewishness to be safer. The truth is I understand that. If you can be safer, why wouldn’t you? But then, I come across moments like the one at the airport in Paris where one Jew helped a fellow Jew simply because she recognized him as a brother. I have spent a fair amount of time in Israel and I travel a lot. Amongst each other, away from other’s eyes, Jews love to argue and to fight. It’s part of our culture. 2 Jews, 3 opinions. But when we feel the weight of the world’s hate on us, we come together. And it’s during moments like that, that you realize how beautiful and strong a bond we have. It gives me hope that just as we endured 2000 years in exile yet managed to stay a nation, now that we have a nation, there is no doubt we will survive – despite other’s best efforts at times. Why? Because at the end of the day, we’ve got each other’s backs.

When I travel, I get to see beautiful places, new cultures, new foods and new sounds. But equal to all of that are the human experiences I have. Usually these experiences let me appreciate humanity as a whole. Once in a while, I have the pleasure of being reminded that my large tribe truly is just one big family.